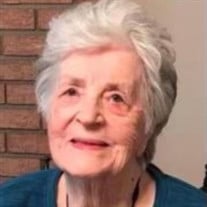 Ann Schade Sloan, 97, wife of the late Philip Sloan, of 190 Sloan Road, Walhalla, passed away Wednesday, December 23, 2020, at Cottingham Hospice House. A native of Heidelberg, Germany, Mrs. Sloan was the daughter of the late Paul and Louise Spangenberg Schade. She was the owner of Margaret-Ann’s fabric shop in Walhalla, SC. She loved making things with her hands, and eager to teach anyone that wanted to learn. Ann was proud of her German heritage and was instrumental in bringing German culture to the people of Walhalla, by being one of the founding members of Oktoberfest. Mrs. Sloan was a member of St. John’s Lutheran Church. Mrs. Sloan is survived by her sons: Philip Martin Sloan of Walhalla, SC, Robert A. Sloan (Laura) of Walhalla, SC and Richard H. Sloan (Lyn) of the Philippines; daughters: Sylvia S. Vaughn (Harris) of Walhalla, SC and Frieda S. Cobb (Jerry) of Walhalla, SC; and many grandchildren and great-grandchildren. A memorial service will be held at a later date. In lieu of flowers, memorials may be made to Prisma Health Hospice of the Foothills, Cottingham Hospice House, Attn: Foundation Office, 298 Memorial Drive, Seneca, SC 29672 or St. John’s Lutheran Church Chef Group, 301 W. Main Street, Walhalla, SC 29691. The family is at their respective homes.

The family of Mrs. Ann Schade Sloan created this Life Tributes page to make it easy to share your memories.

Send flowers to the Sloan family.