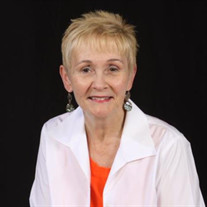 Barbara Donnelly, 75, of Seneca, SC, passed away Nov 10, 2021, with her family at her side. Born Barbara Fay Wilkerson in Huntsville, AL the daughter of Ann Hughes Wilkerson Johnson and Lloyd Henson Wilkerson. Barbara graduated with High Honors in English from Clemson University in 1979 and from Lee High School, Huntsville, AL in 1964. She married Edward Donnelly in Huntsville. The family has lived in Huntsville, AL, Anderson, SC, MD, NC, NJ and currently in Seneca, SC. In addition to caring for her family, Barbara was actively involved in volunteer work and loved working with speech and drama students in Anderson. Barbara was past president of the Project Challenge Playhouse in Anderson. Barbara was preceded in death by her son Christopher Scott Donnelly, half-brother Donald Lee Wilkerson, mother Ann Hughes Wilkerson Johnson and father Lloyd Henson Wilkerson. She is survived by her spouse Edward Neil Donnelly, daughter Devon Donnelly Sharkey and her spouse John Francis Sharkey IV and three grandchildren John Francis, Christopher Patrick and Grace Anne Sharkey. A Funeral Mass will be held at Saint Paul the Apostle Catholic Church, 170 Bountyland Rd., Seneca, SC, Saturday, Nov 13, 2021 at 11 am. Interment will be at Valhalla Memory Gardens, Winchester Rd. NE in Huntsville, AL on Tuesday, Nov 16, 2021 at 11 am where Barbara will be laid to rest next to her son Christopher. In lieu of flowers, the family requests that donations in memory of Barbara be made to St. Paul the Apostle Catholic Church, 170 Bountyland Rd, Seneca, SC 29672, Project Challenge Playhouse, 2005 N. Main Street, Anderson, SC 29621 or Flowers are welcome at the Burial service. Alternatively, the family requests that donations in memory of Barbara be made to The M J Fox Foundation for Parkinson’s Research at PO Box 5014, Hagerstown, MD 21741-5014. Funeral arrangements are being handled by the Davenport Funeral Home, West Union, SC and interment is being handled by the Valhalla Funeral Home, Huntsville, AL.

The family of Mrs. Barbara Donnelly created this Life Tributes page to make it easy to share your memories.

Send flowers to the Donnelly family.