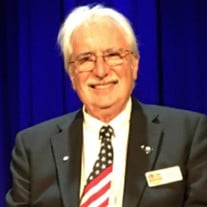 Dennis Alton Owens, 71, husband of Gwen Towe Owens, of 239 Lakeside Drive, Walhalla, passed away on Sunday, January 10, 2021, at Regency Hospital. A native of Walhalla, SC, Mr. Owens was the son of the late Wyatt Young Owens and Annie Louise Patterson Owens Butts. He retired from Duke Energy. Mr. Owens was a member of the Walhalla City Council and Chairman of the Fire and Street and Sanitation Committees; he was the current President for the Board of Directors for the Rosa Clark Clinic; former President and current member of Walhalla Rotary Club; founding member of The Sheriffs Foundation Board and a member of the Crime Stoppers Board of Directors; and he was an alumni of the Citizen’s Police Academy. Mr. Owens was also a member and Past Master of the Blue Ridge Masonic Lodge #92. He attended Salem Baptist Church. In addition to his wife, Mr. Owens is survived by a sister: Patsy Owens of Walhalla. In addition to his parents, Mr. Owens was preceded in death by his infant son: Kevin; and brothers: Eugene, Bruce, Jack and Kenneth Owens. Graveside services will be conducted at 2:00 PM, Wednesday, January 13, 2021, at Oconee Memorial Park. The family will receive friends from 4:00-8:00 PM, Tuesday, January 12, 2021, at Davenport Funeral Home. Dennis had a great and reverent love for God, Gwen, GiGi, his extended family and WALHALLA! “I LOVE WALHALLA”. The family would like to extend a sincere thanks to the staff for the exceptional care that Dennis received while being in the Oconee Memorial Hospital CCU and at Regency Hospital. The family request that flowers be omitted and memorials be made to the Rosa Clark Medical Clinic, 301 Memorial Drive, Seneca, SC 29672. The family is at the home.

The family of Mr. Dennis Alton Owens created this Life Tributes page to make it easy to share your memories.

Send flowers to the Owens family.