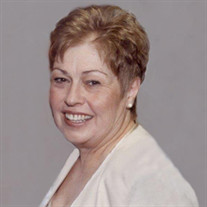 Doris Nichols Smith, 76, of Winfield, Kansas, passed away Sunday evening, January 24, 2021 at her home. Born February 16, 1944 in Walhalla, South Carolina, she was the daughter of James Carter “JC” and Rubye G. (Carter) Nichols. She was raised and received her education in Walhalla, graduating from Walhalla High School in 1962. Doris was united in marriage to Wade H. Smith Jr., on October 16, 1965 at the Second Baptist Church in Walhalla. The couple made their first home in Seneca, South Carolina until moving to Newton, North Carolina. Doris attended nursing school in Morganton, North Carolina where she received her degree as a Registered Nurse. Following nursing school, she worked at Catawba Memorial Hospital until 1976 when the couple’s daughter, Ashley, was born. Doris became a faithful and dedicated homemaker, caring for every need of her husband and daughter. She would later return to Walhalla to care for her mother. In 2016, she moved to live with her daughter and traveled the United States with their family, before settling in Winfield, Kansas in 2020. Doris was a faithful church goer wherever she lived. She enjoyed shopping, reading newspapers, and was an avid baker. Her family includes her daughter Ashley Kramp and husband, Steven of Winfield; her aunt Allene Bearden; her brothers, Hershal Nichols and wife, Sylvia; Terry Nichols and wife, Kym; her grandchildren, Elijah, Paige, Zane, Olivia, Micah, Grace, and Bridger; and numerous nieces, nephews, and cousins. Doris was preceded in death by her parents, JC and Rubye Nichols, and a brother James Nichols. Funeral services will be held at Davenport Funeral Home in West Union, South Carolina at 2:00 P.M., Saturday, January 30, 2021. Interment will follow at Oconee Memorial Park Cemetery in Seneca. A visitation is scheduled from 6:00 P.M. to 7:00 P.M. on Friday January 29, 2021 at the funeral home. The family will greet visitors that evening. Service will be livestreamed on Davenport Funeral Home’s Facebook Page.

The family of Mrs. Doris Nichols Smith created this Life Tributes page to make it easy to share your memories.

Send flowers to the Smith family.