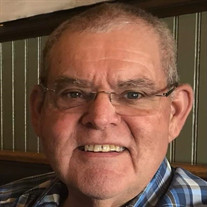 Seneca, SC– Douglas Wayne “Hoss” Cain, 69, went to be with his Lord and Savior on Monday, April 25th, 2022. Wayne was a founding member of Maranatha Baptist Church where he served tirelessly most of his adult life. Born in Seneca, SC, and resided in the Keowee Community. Wayne was the son of the late Griffin and Elizabeth Cain. He worked all of his years in health supporting his wife and daughter. When he was not at work, he could be found in the yard busting up firewood, visiting with family, playing practical jokes, mowing the grass, building anything he decided he wanted to, camping, playing board games, and most important to him, making all of his daughter’s dreams come true. Wayne spent many years working at JP Steven’s where he was known as “Pepsi”. He was a maintenance man and was known to always have a 2-liter Pepsi somewhere close by. He met every challenge with energy to learn new things. He was a Doberman breeder, a candle maker, a devoted husband and father, and a papa and “Popsicle” to many nieces and nephews over the years. He was known as a Jack of all trades who never grew tired of adventure. Wayne retired from Shaw in 2018. After all those years of working he, his wife, daughter and son in law, embarked on many travel adventures. When he began to enjoy retirement, you could find him looking for ways to improve his yard or family home. He always found some free time to work on classic cars and trucks with his brother Dale. He loved leisure rides with his wife Dianne in his and her favorite classic mustang. He shared with anyone who would listen how much he loved Chris and how satisfied he was that his baby girl was married to a man who loved, cared for and adored her. Wayne leaves a legacy of love, faith in Jesus, hard work, and adventure. He is survived by his wife Dianne Miller Cain and daughter April Cain Kelly (Chris). Other Survivors include his brothers, Dale Cain, Kenny Cain (Pat), Wesley Cain, and his sister Ann Hayes. In addition to his parents, Wayne was preceded in death by his late brothers Donnie and Junior Cain. Services will take place at Davenport Funeral Home in West Union, SC. Visitation will be Saturday, April 30th at 10:00am followed by the service at 11:00am. Burial to follow at Oconee Memorial Park. Flowers are welcome and can be sent to the funeral home, or if you would like to give a donation in his memory the family asks that those gifts be sent to Maranatha Baptist Church at 240 Keowee School Road, Seneca, 29672.

The family of Mr. Douglas Wayne "Hoss" Cain created this Life Tributes page to make it easy to share your memories.

Send flowers to the Cain family.