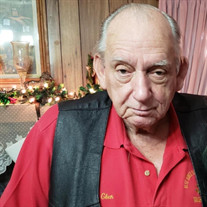 Glen Davis Bolt, 76, husband of Brenda Cobb Bolt, of 175 Town Road, West Union, passed away Monday, June 7, 2021, at Oconee Memorial Hospital. A native of Anderson, SC, Mr. Bolt was the son of the late James Henry Bolt, Sr. and Maybel Bryson Bolt. He was the owner and operator of B&B Grading and was a member of Mt. Grove Baptist Church. Mr. Bolt was a member of the Blue Ridge Masonic Lodge #92, where he was a Past Master, the Hejaz Shrine Temple and the Blue Ridge Shrine Club. In addition to his wife, Mr. Bolt is survived by his sister: Joella White of West Union; and grandchildren: Valarie Bolt and Cheryl Bolt both of West Union. In addition to his parents, Mr. Bolt was preceded in death by his son: Timothy Allen Bolt; and brothers: Joye Bolt and James Bolt, Jr. Funeral services will be held at 2:00 PM, Friday, June 11, 2021, at Davenport Funeral Home Chapel with Masonic Rites. The family will receive friends from 1:00-2:00 PM, Friday, prior to the service, at Davenport Funeral Home. Flowers are accepted or memorials may be made to the Blue Ridge Masonic Lodge, P.O. Box 1352, Walhalla, SC 29691. The family is at the home.

The family of Mr. Glen Davis Bolt created this Life Tributes page to make it easy to share your memories.

Send flowers to the Bolt family.