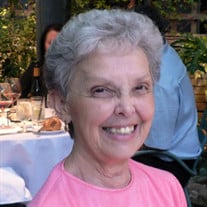 Joan Ann Llewellyn Kishbaugh, wife of Albert A. Kishbaugh, of 215 S. Reach Lane, in Keowee Key, Salem, SC died on Tuesday, December 21, 2021, after a brief illness. Born in Charlotte, NC and raised primarily in Philadelphia, PA, Joan graduated from John Bartram High School in 1952, and worked for the railroad. She married her longtime sweetheart and brother’s best friend, Albert Kishbaugh, on April 14, 1956. The couple remained married at the time of Joan’s death 65 years later. Upon marriage in 1956, Joan and Albert moved to North Augusta, SC, where they both worked at the Savannah River Plant. They had 3 children, Linda Ann born in 1960, Janet Lee born in 1962, and Alan Jay born in 1963. In 1971, the family moved to Wilmington, DE as part of Albert’s job. They spent 20 years in Wilmington raising the family before retiring to Keowee Key in Salem, SC. In 2019, the couple moved to Clemson Downs Assisted Living. Throughout her life, Joan was a friend to all whose lives she touched. Joan was a devoted mother to her three children and their spouses; a doting grandmother to her seven grandchildren; and a proud great-grandmother to her two great-grandsons. Joan always said that the one role in life that was accurately portrayed was “grandparent (and great-grandparent)”. She cherished being able to love her grandkids unconditionally and then give them back to her children’s responsibility afterward. Her grandkids and great-grandkids loved her right back. An avid reader and crossword puzzle aficionado, Joan also was a life-long community servant, volunteering countless hours at her church in Wilmington, DE, and at both Hospice and Habitat for Humanity in Seneca, SC. Joan is survived by her husband Albert, daughter Linda (David) DeBaun of Danville, CA, and their two children, daughter Ashley DeBaun and her fiancé Grant Robson of Morgan Hill CA, and son Brian (Megan) DeBaun of Conshohocken, PA, and their two sons David Hayman and Desmond DeBaun; daughter Janet Kishbaugh and her wife Helen Panarites of Atlanta, GA, and their two daughters Mia and Jamie Panarites; and son Alan (Donna) Kishbaugh of Germantown, MD and their three children, Darrin Royal and his husband Curtis; Connor Kishbaugh; and Britney Kishbaugh and her fiancé Brad Hyde. Joan is also survived by her brother, Alfred C. Llewellyn, his wife Jane, and their three children and families. A memorial service will be conducted at 2:00 PM, Thursday, December 30, 2021, at Davenport Funeral Home. For the safety of all the guests, the family is requiring that all those in attendance wear a mask. Condolences may be sent to the family by visiting www.davenportfuneralhome.com. In lieu of flowers, the family suggests making donations to either Prisma Health Hospice of the Foothills, Attn: Foundation Office, 298 Memorial Drive, Seneca, SC 29672 or Habitat for Humanity, 130 Bountyland Road, Seneca, SC 29672.

The family of Mrs. Joan Ann Llewellyn Kishbaugh created this Life Tributes page to make it easy to share your memories.

Send flowers to the Kishbaugh family.