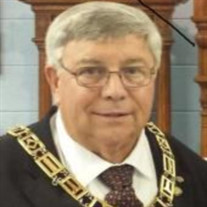 Mr. Johnnie Felton James, age 74, of Seneca, SC and Morven, NC, died Monday, January 11, 2021 while a patient at Atrium Health Union in Monroe, NC. Born in Stephens County, Georgia on January 12, 1946, Johnnie was a son of the late George Edward and Austeen Scoggins James. Shortly after his birth, his family moved to the Oconee area of South Carolina, where Johnnie grew up with his five brothers and one sister. In 2000, after a long career spent as a police officer in Seneca, Clemson and Westminster, Johnnie decided to turn in his badge and enjoy retirement and family. He was an active member of Seneca Masonic Lodge #185 where he served as Treasurer for 17 years. Johnnie had also served the SC 15th District as a District Deputy Grand Master and was a Past Grand Tyler for the Grand Lodge of South Carolina. Because of his distinguished service to Masonry, Johnnie was honored with both the "Frederick Dalco Certificate of Merit" and the "Albert Gallatin Mackey Medal." These awards are the highest honors that can be conferred on a Mason in South Carolina. Survivors include his wife of nearly 50 years, Margaret Short James of the home; his son, David J. James of Seneca; a brother, Ronnie James of Habersham County, GA; a sister, Barbara J. Moore of Seneca; many nieces, nephews, and in-laws whom Johnnie greatly cherished. In addition to his parents, Johnnie was preceded in death by four brothers, Joe Burgess, Gene James, Ernest James and Donnie James. A memorial service will be held at 2:00 PM, Saturday, March 27, 2021, at Davenport Funeral Home Chapel with Masonic Rites. The family suggest memorials be made to: Office of Development, Shriners Hospitals for Children — Greenville, 950 W. Faris Road, Greenville, SC 29605 or to Prisma Health Hospice of the Foothills, c/o Oconee Memorial Hospital Foundation, 298 Memorial Drive, Seneca, SC 29672.

The family of Mr. Johnnie Felton James created this Life Tributes page to make it easy to share your memories.

Send flowers to the James family.