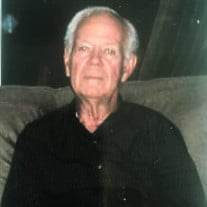 Lewis Bramlett Lusk, Jr., 89, of Seneca, SC passed away Monday, November 2, 2020. Known to all loved ones and friends as “Bram”, he was born December 31, 1930 to the late Lewis and Ila Lusk in Walhalla, SC. He graduated from Walhalla High School and completed his bachelor’s degree later in life. Early in his 23-year career with the US Air Force, he married the late Marion Joan Kendall, in her home town of Cheltenham, England, in 1953. After retiring from the Air Force, he was a proud employee of the US Post Office in Walhalla. Bram is survived by his three children: Stephanie DeGange (Stephen) of Rock Hill, Dwayne Lusk (Susan) of Clemson and Scott Lusk (Lillian) of Fair Play. He is also survived by four grandchildren: Jonathan, Joshua, Hannah and Andrew; and by his kindred spirit in late life, Beatrice Adams. Bram loved gardening and held a special place in his heart for azaleas in full bloom. His lifetime hobby of trading stocks and researching the companies behind them was one of many secrets to a vital and long life. Bram was also an old-school rhythm guitarist and crooner. He was never far from his instrument, loved country music and knew the lyrics to countless standard classics. He will be greatly missed by his family and friends. A graveside service will be conducted at 3:00 PM, Sunday, November 15, 2020, at Oconee Memorial Park. In lieu of flowers, memorials may be made to Habitat for Humanity International, 322 West Lamar Street Americus, Georgia 31709. The family is at their respective homes.

The family of Mr. Lewis Bramlett Lusk Jr created this Life Tributes page to make it easy to share your memories.

Send flowers to the Lusk family.