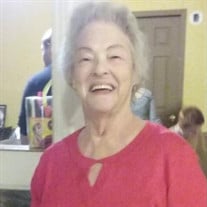 Nellie Margaret Mitchell, 75, wife of the late Richard Lee Mitchell, of 223 Friendship Road, Seneca, passed away Wednesday, September 29, 2021, at her home. A native of Oconee County, SC, Mrs. Mitchell was the daughter of the late Robert Thaddeus and Eunice Williams Martin. She was formerly a member of the Courtney Eastern Star and of Old Hepsibah Baptist Church. Mrs. Mitchell is survived by her son: James Robert “Hogg” Mitchell (Kimberly) of Seneca, SC; daughter: Katherine R. Mitchell of Seneca, SC; twelve grandchildren, twenty-nine great-grandchildren and one great great-grandchild. In addition to her husband and parents, Mrs. Mitchell was preceded in death by her son: Richard Glenn Mitchell; daughter: Meta Lee Phillips; four brothers and one sister. Funeral services will be conducted at 11:00 AM, Saturday, October 2, 2021, at Davenport Funeral Home Chapel with burial to follow at the Dodd Family Cemetery. The family will receive friends from, 10:00-11:00 AM, Saturday, prior to the service, at Davenport Funeral Home. Flowers are accepted or memorials may be made to Hospice of the Upstate, 1835 Rogers Road, Anderson, SC 29621. The family is at the home.

The family of Mrs. Margaret Mitchell created this Life Tributes page to make it easy to share your memories.

Send flowers to the Mitchell family.