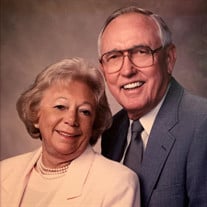 Marion Jeanette Every was born on November 10, 1925. 95 years later, November 23, 2020 she passed on. Her life was full of experiences but she stayed focused on her family. She follows her husband, Russel, her daughter, Gloria Fording, and granddaughter, Tracy Lynn Lawson, her siblings, Margaret Brakke, Harold Olson, and Eleanor Hedburg into eternal life. Her life focus was helping and nurturing her children, grandchildren and great grandchildren. She is survived by her sons, David (Eva), and William (Barbara), 7 grandchildren and 16 great grandchildren. She was born in Michigan’s Upper Peninsula in the small town of Bark River and moved with her family to Ypsilanti, Michigan before World War II. During the war, she met Russel at a USO Dance for soldiers. Later, they married in May 1945. During the next 50 years, they lived in the Michigan and Ohio area. Wherever they lived, she would always make their home welcoming and inviting the whole family. After they retired, they moved to the upstate area of South Carolina. There they hosted many family gatherings and summer vacations with the great grandchildren. She concluded her life living in Twin Falls, Idaho, where she enjoyed her final days with Bill and his family and in view of snowcapped mountains. The family wishes to express its great gratitude to Bill and his wife, Barbara, for committing the last 15 years to the care of both Russel and Marion. She will be interred next to her husband in Seneca, South Carolina on Tuesday December 8, 2020 in a private service. In lieu of flowers, the family wishes memorials be sent by way of donations to the organization that offered so much comfort and love to Mom and to us: “In memory of Marion Every” Hospice Visions, 455 Park View Loop, Twin Falls, Idaho 83301-3393.

Marion Jeanette Every was born on November 10, 1925. 95 years later, November 23, 2020 she passed on. Her life was full of experiences but she stayed focused on her family. She follows her husband, Russel, her daughter, Gloria Fording, and... View Obituary & Service Information

The family of Mrs. Marion Jeanette Olson Every created this Life Tributes page to make it easy to share your memories.

Send flowers to the Every family.