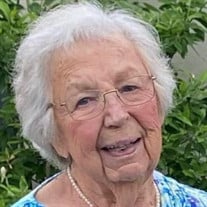 Maxie Lee Wright Duke (93) passed peacefully in her home with family by her side on December 16, 2020. Born June 16, 1927, in Highlands, NC, Maxie is predeceased by her parents, Charles N. Wright and Helen Cabe Wright Wilson. She was married to the late Albert A. Duke, Sr., and is survived by a brother - Josh Wilson (Pat) of Belton; children - Susan Clarkson (Greg) of Highlands, NC, Margaret Powell of Seneca, Albert A Duke Jr. (Becky) of Walhalla, Alisa Gunter (Dennis) of Landrum and Mary Helen Duke of Tampa, FL. She is “Granny Duke” to her grandchildren – Holly Vanhorn (John), Alexis Keating (Robin), Jonathan Clarkson (Kayla), JD Powell (Kerri), Amanda Powell, Chris Gunter (April), Barak Gunter (Megan), Kaleb Gunter and Carter Duke and “GIGI” to her great grandchildren – Jackson Vanhorn, Samhradh and Lana Keating, Benjamin, Emily and Matthew Clarkson, Jack, Tucker and Hampton Powell, Claire Gunter and Max Gunter. Passionate about hard work, education, service, and the political process, Maxie led a full and productive life. She earned an undergraduate degree from Western Carolina Teacher’s College and a Master’s Degree in Education from Clemson University. Taking a leave from teaching while raising her children, Maxie worked alongside Albert at Duke’s Economy Drugs in Walhalla but then returned to teaching in the Oconee County School System, where she retired from Walhalla Senior High in 1989. With her commitment to education, Maxie’s early years of service to her community and state included being elected to the Oconee County School Board and appointed to the South Carolina State School Board. A few years prior to her retirement, Maxie and her longtime friend, Sid Ballenger (deceased), took to the trails on the weekends and sought to find and photograph every waterfall in Oconee County. In 1983 they published “Some Waterfalls, Cascades and Shoals in Oconee County” and made many presentations to local church and civic groups showcasing their efforts. Always the activist, Maxie and a group of ladies instigated a petition and acquired enough signatures to travel and present a request to the Governor of South Carolina and, as a result, Highway 28 between Walhalla and Seneca was straightened and widened. Maxie considered herself a “Yellow Dog Democrat” and worked tirelessly over the years for national, state, and local Democratic Party candidates. Highlights of her efforts were attending the inauguration of Bill Clinton in 1993 and being inducted into the South Carolina Democratic Women’s Hall of Fame in 2007. Not wanting to let any grass grow under her feet, Maxie and a group of volunteers banded together to preserve and save the historic Walhalla Graded School building. The Walhalla Auditorium Restoration Committee (WARC) was formed. The committee held numerous fundraisers and asked the community for donations which lead to the Walhalla Civic Auditorium opening in 2003. Today, Walhalla Performing Arts Center (WPAC) is a vibrant part of Walhalla and Oconee County and provides a wide variety of entertainment. Upon learning that an historic church building was to be moved outside of Walhalla, Maxie once again gathered volunteers and formed a group to “Save Old St. John’s Church.” Fundraising and grant writing commenced, and the church was dedicated in its new location in September 2014 at the Walhalla Depot as Old St. John’s Meeting House, a venue for weddings and community gatherings. Maxie’s local achievements were recognized several times. In 2000, Walhalla held its sesquicentennial and, as a part of the celebration, Maxie was named First Lady of Walhalla. In September 2007, Governor Mark Sanford awarded Maxie the Order of the Silver Crescent for her significant contributions, leadership, volunteerism, and lifelong influence within Walhalla and Oconee County. Her most recent accomplishment was authoring Charlie and Helen-Chronicles of Love, Heroism and Persistence. Published in 2019, the book details her family history through stories and photographs. The family wishes to thank those most faithful to our mother over the years while she was still able to be at home, Della Wright and Gloria Cleveland. Due to COVID restrictions, a private family service will be held and burial will be in Highlands Memorial Cemetery. Memorials can be made to St. Luke United Methodist Church – Forward Fund - (607 E. Main Street, Walhalla, SC 29691), where Maxie was a member or to Prisma Health Hospice of the Foothills (Attn: Foundation Office, 298 Memorial Drive, Seneca, SC 29672).

Maxie Lee Wright Duke (93) passed peacefully in her home with family by her side on December 16, 2020. Born June 16, 1927, in Highlands, NC, Maxie is predeceased by her parents, Charles N. Wright and Helen Cabe Wright Wilson. She was married... View Obituary & Service Information

The family of Mrs. Maxie Lee Wright Duke created this Life Tributes page to make it easy to share your memories.

Maxie Lee Wright Duke (93) passed peacefully in her home with...

Send flowers to the Duke family.