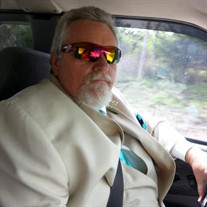 Robert “Odell” Voyles, 61, husband of Karen Voyles, of Walhalla, passed away on Wednesday, September 29, 2021, at Prisma Health Oconee Memorial Hospital. A native of Oconee County, SC, Mr. Voyles was the son of Clara Mildred Hall Voyles and the late Herman Odell “Pete” Voyles. He was employed with Schneider Electric and had a Doctrine of Divinity. Mr. Voyles was a member of Westminster First Baptist Church, where he served as a Deacon. He surrendered to preach in 1991 and faithfully served his Lord and Savior through years of ministry and song. In addition to his wife and mother, Mr. Voyles is survived by his son: Bradley Odell Voyles (Chasity) of Seneca, SC; daughter: Candice Nichole Swafford (Cody) of Westminster, SC; brother: Anthony Brian Voyles (Michelle) of Surfside, SC; grandchildren: Ella Voyles, Landen Voyles and Hailey Swafford. In addition to his father, Mr. Voyles was preceded in death by his grandchildren: Peanut and Sammy. Funeral services will be conducted at 2:00 PM, Sunday, October 3, 2021, at Westminster First Baptist Church with burial to follow at Heritage Memorial Gardens. The family will receive friends from 1:00-2:00 PM, Sunday, prior to the service, at the church. In lieu of flowers, memorial donations may be made to Karen Voyles to help go towards the hospital bills, https://www.gofundme.com/f/ask-for-help-for-odell-karen/donate. The family is at the home of the daughter, 308 Mikas Way, Westminster, SC 29693.

The family of Mr. Odell Voyles created this Life Tributes page to make it easy to share your memories.

Send flowers to the Voyles family.