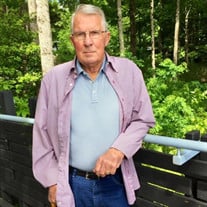 Ray Dover Reed, 78, passed into eternity with God on February 2, 2021, at his home in Seneca, SC. Ray and his twin brother, Ralph, were born in the Whiteside Cove of Jackson County, NC on February 10, 1942. His parents were the late Edward Lewis “Ed” and Hazel Mae Neely Reed. Ray grew up in Rabun County, GA until marriage and his working career led him to Oconee County, SC in 1967. He was a member of the 1960 Rabun County High School Class where he played football for four years under Coach Frank Snyder. He was a 36-year employee of Sangamo/Schlumberger. He filled many positions and ended his career as Production Control Manager. It was reported by numerous people he worked with, that he excelled in the management of people. After retirement Ray took pride in working with MJM Poured Wall with his cousins, Merlin and John Crowe, where he learned the ropes of poured wall and concrete finishing. He was a faithful member of Hepsibah Baptist Church, where he was a member of the Seniors Sunday School Class led by John Campbell, which he loved and enjoyed. There he demonstrated a great love for the Lord and the worship experience. After his work experiences, he enjoyed travel to Alaska, The Western States, Canada and more local excursions to Myrtle Beach. Uppermost in his travel experiences was a dozen or so Elk hunting trips to Colorado, Wyoming, etc., where he demonstrated significant prowess with archery, bringing home several trophy elk and mule deer. Uppermost in Ray’s post-retirement years was the delight, with Doug Gilliam, he took in the restoration to mint condition of a 1940 Ford pickup truck. He developed many lasting friendships during this process. He was preceded in death by his parents, Ed and Hazel Reed, a brother, George Edward Reed, a sister, Louise Reed Gaddy, his parents-in-law, Rev. Eldon and Clara Owens, a niece, Sherry Owens, and two infant nephews. He is survived by his wife of 54 years, Wanda Irene Owens Reed, a son, Darren Ray Reed (Renee) of Boiling Springs, SC, twin brother, Ralph (Charlotte) of Clayton, GA, a sister, Mary R. Owens of Clayton, GA, sister-in-law, Barbara Wilson Reed Rice of Clayton, GA and many nieces and nephews. Funeral services will be conducted at 1:00 PM, Saturday, February 6, 2021, at Hepsibah Baptist Church with Dr. Jimmy Boggs, Rev. Perry Gardner and Rev. John McKnight officiating. Burial will follow at Macedonia Baptist Church Cemetery on Highway 28, Clayton, GA. American Sign Language interpreting will be provided by Mrs. Barbara Boggs and Dr. Alton Brant. The family will receive friends from 6:00-8:00 PM, Friday, February 5, 2021, at Davenport Funeral Home. The family is at the home on E. Springwood Drive, Seneca, SC. In lieu of flowers, memorials may be made to Macedonia Baptist Church Cemetery Fund, 325 Timberlane Road, Clayton, GA 30525.

Ray Dover Reed, 78, passed into eternity with God on February 2, 2021, at his home in Seneca, SC. Ray and his twin brother, Ralph, were born in the Whiteside Cove of Jackson County, NC on February 10, 1942. His parents were the late Edward... View Obituary & Service Information

The family of Mr. Ray Dover Reed created this Life Tributes page to make it easy to share your memories.

Ray Dover Reed, 78, passed into eternity with God on February...

Send flowers to the Reed family.