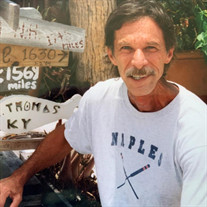 Steven Reed Sparks, 71, husband of Connie Sparks, passed away on Monday, August 31, 2020, at his home. A native of Fort Thomas, KY, Mr. Sparks was the son of the late Reed Clement and Gladness Purser Wright Sparks. He was an artist and photographer, Owner of Genesis Gallery photography studio and framing and co-owner of Genesis Press Printing Company in Fort Thomas, KY. He grew up along the Ohio River with his siblings and cousins and from there, his love for the river was born. He excelled in track and field at Highlands High School and was also named Who’s Who Among American Students and Universities. He attended the University of Southern Mississippi where he studied journalism and was a member of the Sigma Alpha Epsilon fraternity. After college, Steve became the sports editor of the McComb Mississippi newspaper and later wrote for the Fort Thomas Living. Though he never had one lesson, Steve used fascination with the Ohio River and riverboats as his inspiration for beautiful oil paintings of riverboats from the late 1800s. Steve enjoyed playing tennis with his family and friends. He returned to his alma mater, Highlands, to coach the varsity boys’ tennis team, where they won several regional championships. He was also a lifelong Cincinnati Bengals and Cincinnati Reds fan. Later in his life, Steven moved to upstate South Carolina and began building his dream mountain home and began paintings of the beautiful mountains and waterfalls there. In addition to his wife, Mr. Sparks is survived by his sons: Reed Sparks of Ft. Thomas, KY and Brett Sparks of Cincinnati, OH, Josh Stratton (Suzy) of Overland Park, KS; daughters: Sarah Kleier (Matthew) of Ft. Thomas, KY and Bailey Duncan (Dominic) of Columbus, OH; brother: Scott Sparks of Richwood, KY; sisters: Linda Sparks of Parrish, FL and Sally Muehlenkamp of Ft. Thomas, KY; and grandchildren: Meredith Kleier, Christopher Sparks, Tyler Brown, Devin Truelove, Jon Stratton, Kaitlin Stratton, and Violet Hill. A memorial service will be conducted in Ft. Thomas, KY at a later date. In lieu of flowers, the family requests memorials be made to the Tamassee DAR School, P.O. Box 8, Tamassee, SC 29686, in thanks to the staff and students for their love and support.

Steven Reed Sparks, 71, husband of Connie Sparks, passed away on Monday, August 31, 2020, at his home. A native of Fort Thomas, KY, Mr. Sparks was the son of the late Reed Clement and Gladness Purser Wright Sparks. He was an artist and photographer,... View Obituary & Service Information

The family of Mr. Steven Reed Sparks created this Life Tributes page to make it easy to share your memories.

Send flowers to the Sparks family.