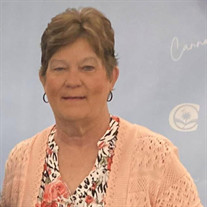 Velma Ann Chapman Hendrix, 70, wife of Jimmy Drew Hendrix, of 163 Sheriff Road, Central, passed away Tuesday, June 8, 2021, at AnMed Medical Center. A native of Central, SC, Mrs. Hendrix was the daughter of the late Weldon Smith Chapman and Velma McNeely Chapman. She retired as a Kindergarten Assistant with the Pickens County School District. Mrs. Hendrix was a member of Cannon Memorial Baptist Church, where she was a member of the choir, children’s ministry and served as a Sunday school teacher for more than 40 years. In addition to her husband, Mrs. Hendrix is survived by her son: Tim Hendrix (Heather) of Walhalla, SC; daughter: Hope Shirley (Kendall) of Norris, SC; grandchildren: Peyton and Morgan Hendrix and Anna Grace Shirley; and nieces: Judy Lynn Black (JL) and Amy Campbell. In addition to her parents, Mrs. Hendrix was preceded in death by her sister: Haveline Hall Davis. Funeral services will be conducted at 2:00 PM, Friday, June 11, 2021, at Cannon Memorial Baptist Church with burial to follow at Memory Gardens, Central, SC. The family will receive friends from 12:30-1:30 PM, Friday, prior to the service, at the church. Flowers are accepted. The family is at the home.

The family of Mrs. Velma Ann Chapman Hendrix created this Life Tributes page to make it easy to share your memories.

Send flowers to the Hendrix family.