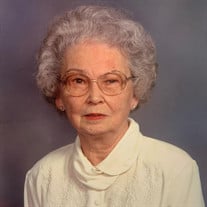 Velma Beasley Letson, born on October 2, 1927, passed away on Sunday, September 5, 2021, at the South Carolina Presbyterian Retirement Center in Clinton, SC. She was the wife of the late Rev. Clarence L. Letson and a member of the Walhalla Presbyterian Church. Born in Warsaw, GA (McIntosh County), she was the daughter of the late Albert D. Beasley and Sallie Mae Townsend Beasley. Velma was preceded in death by a brother Albert B. Beasley and a sister Louise Sapp Beasley. She is survived by her son, Clarence L. Letson, Jr. ‘Buddy’; grandchildren Townsend Craig Letson (Brenda R. Letson), and Becka Letson Tuttle (Paul A. Tuttle, III); great-grandchildren Charlotte, Abigail and Elizabeth Tuttle, Darrow Letson, and Annie Felix; nieces Alyssa S. Fredrick (Steve Fredrick) and Beth H. Crowson, and nephews Beamon H. Sapp and B. Troy Holder (Wendy Holder). Velma grew up in Riceboro, GA (Liberty County) and graduated in 1942 from Bradwell Institute in Hinesville, GA. During World War II, she worked at Fort Stewart in Hinesville, GA. Clarence, her husband, a Presbyterian Minister, was a Chaplain in World War II stationed in New Guinea. After the war, he returned to serve three churches in Liberty County that he ministered to before the war. One of the churches he served was Riceboro Presbyterian Church, where Velma attended. They were married in 1945. Clarence accepted a minister's position at a Presbyterian Church in Columbus, GA, where they moved in 1945 and later celebrated the birth of their son, Buddy, in 1946. In 1948 the family received a call to go to Laurens, SC, serving the Grace Covenant Presbyterian Church. In 1952 they relocated to Walhalla, SC. They accepted their final call here before Clarence retired from pastoral duties at the Walhalla Presbyterian Church. Remaining at the Walhalla church until Clarence's retirement in 1972, they then moved to Seneca, SC. Clarence passed away in 1995, and Velma remained in Seneca until 2008 when she moved to the SC Presbyterian Retirement Center in Clinton, where she lived until her recent death. Velma was a devoted minister's wife. She used her many talents to assist or fill in whenever and wherever her husband and the churches they served needed her. Her accomplishments included learning to play the piano and organ for musical accompaniment at prayer meetings and the West Union Chapel services. She transcribed and printed the church bulletin for all of the years she assisted the Walhalla church. She was involved with Circle Meetings and the Women of the Church. Over the years, she scheduled and planned for church members and herself to attend numerous conferences in Montreat, NC. She was also a counselor at the Camp Grier Junior High and Senior High Youth Camps in Old Fort, NC, and the Senior High Fellowship leader at the Walhalla Presbyterian Church. Velma was one of the original Gray Ladies founded in the early 1950s at Oconee Memorial Hospital in Seneca. She continued to volunteer at the Lila Doyle Nursing and Rehabilitation Center until she moved to Clinton. Velma was very active at the Retirement Center in Clinton. She joined the 'Busy Fingers’ knitting group upon her arrival. Over the years, the group knitted hundreds of caps and blankets for the newborns at the Laurens and Greenwood County hospitals. Velma was a devout Christian who indeed served her Lord. She taught us to love all people no matter their background. She always gravitated toward those in need and would do her best to help the less fortunate. Velma started the West Union Chapel with her husband, Clarence, to enrich the lives of the children in the area, which was one of her most significant accomplishments. Over the years, watching these children grow into adulthood and become successful in life best exemplified her faith in the Church and the people they helped along the way. A private family graveside service will be conducted at Oconee Memorial Park. In addition, the family will host a celebration of her life for friends and family at a later date. In place of flowers, memorials may be made to the Walhalla Presbyterian Church, Attn: Building Fund, PO Box 917, Walhalla, SC 29691.

Velma Beasley Letson, born on October 2, 1927, passed away on Sunday, September 5, 2021, at the South Carolina Presbyterian Retirement Center in Clinton, SC. She was the wife of the late Rev. Clarence L. Letson and a member of the Walhalla Presbyterian... View Obituary & Service Information

The family of Mrs. Velma Beasley Letson created this Life Tributes page to make it easy to share your memories.

Send flowers to the Letson family.