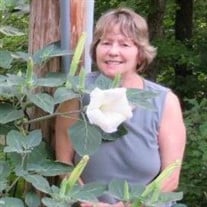 Vicki Lee Bernhardt, 68, wife of Steven Bernhardt, of Seneca, passed away on Monday, March 28, 2022 at Cottingham Hospice House, after a brave battle with cancer. In addition to her husband, Vicki is survived by her daughter: Jennifer (Luis) Correia of Reedsburg, WI; brothers: Ken (Patty) Briggs and Don (Lynda Thibado) Briggs; sisters: Lynda (David) Spohnholtz and Dianna (Dennis) Westphal; and two beloved grandchildren: Tristan Correia (Jenna Butterfield) and Skyler Correia. She leaves behind many wonderful nieces and nephews, who she cherished. She also had two cats that she loved greatly, Bubba and Tinkerbell. Born in Richland Center, WI, Vicki was the daughter of the late Kenneth and Elizabeth (West) Briggs. She spent her early childhood years living on a farm near Bunker Hill in Cazenovia, WI, and loved to share stories about her pet cow named Honey. She lived in Rock Springs, WI, where her family owned and operated The Club Royale. She graduated from Webb High School in Reedsburg, WI in 1971. Vicki and Steve were married October 3, 2001 in Beaufort, SC. She and her husband relocated to Seneca, SC in 2014, where they were enjoying their retirement. Vicki’s greatest joy was spending time with family and her many friends. She had fond memories of her family cabin in northern WI, enjoyed fishing for Musky and Northern Pike, and was noted for catching the first, the most, and the biggest fish. Vicki took pride in her beautiful yard, and had developed a talent for landscaping and flower gardening. She loved feeding the birds, squirrels, and critters that would visit her home. She also appreciated listening to music, attending concerts, festivals, and sporting events, as well as traveling the United States, Mexico, and Central America. She was especially fond of Costa Rica. A Celebration of Life will be held in Wisconsin at a later date.

Vicki Lee Bernhardt, 68, wife of Steven Bernhardt, of Seneca, passed away on Monday, March 28, 2022 at Cottingham Hospice House, after a brave battle with cancer. In addition to her husband, Vicki is survived by her daughter: Jennifer (Luis)... View Obituary & Service Information

The family of Mrs. Vicki Lee Bernhardt created this Life Tributes page to make it easy to share your memories.

Send flowers to the Bernhardt family.