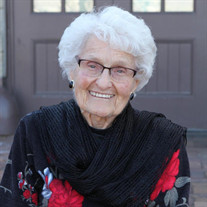 Ceytru “Trudy” Bentley Garner, 88, of Boise, Idaho, formerly a long-time resident of Seneca, South Carolina, died on March 2, 2022. Funeral services will be held Friday, March 11 at 2 pm at The Church of Jesus Christ of Latter-day Saints at 5003 Wells Hwy, Seneca, South Carolina. The family will greet friends following the service. Interment will be held previously, family only, at Oconee Memorial Gardens. An additional memorial service will be held Saturday, March 26 at 14400 S Redwood Road, Bluffdale, Utah at 11 am. All are invited. In lieu of flowers, donations can be made to the Humanitarian Fund of The Church of Jesus Christ of Latter Day Saints or Clemson University Foundation - Thomas H. Garner Scholarship Fund (155 Old Greenville Hwy, Unit 105, Clemson, SC 29631). Trudy was born March 31, 1933, the eldest child of the late Richard Ivins Bentley and Oleta Gladney Bentley, in Wellington, Texas. During her earliest years, she and her mother followed her father’s employment in railroad construction camps across Arizona and New Mexico. As she grew older, her family lived on a ranch in Nevada and farms in California and Missouri. In 1950, she graduated with honors from Republic High School (Missouri). After a year in business school, Ceytru worked in Washington D.C. for the Army where she met Captain Thomas Garner, from Farmer, North Carolina. They were married on July 26, 1954. Their union was later sealed for eternity in the Salt Lake Temple of The Church of Jesus Christ of Latter-day Saints on June 10, 1960. After Tom completed his education at NC State, he accepted a position at Clemson University and they settled in Seneca, South Carolina. Together Trudy and Tom established a home which welcomed seven children, and she was truly the heart of it. She was a patient mother, quick to smile and quick to praise, especially with a knowing look. Trudy knew how to live on a tight budget, type a thesis, and make and mend clothing. She enjoyed keeping a large garden, loved flowers, and took pleasure in cooking and preserving food for her family. She supported Tom and her children in work, school, and church-related activities. In spare moments, she would sit down to read. As her children grew into adulthood with families of their own, she was the chief letter writer, genealogist, and organizer of eleven memorable family reunions. Trudy was a gifted teacher and leader of children, youth, and adults, serving for many years in her church’s Primary organization, Cub Scouting, Seminary, (a daily hour of gospel study for teenagers), and the women’s Relief Society. She joined the Extension Homemakers Club of Oconee County, becoming a leader as well as a participant. In 1993, Trudy and Tom served as full-time missionaries in the Texas Dallas Mission, serving in the Longview area for eighteen months. She was a regular volunteer in the local family history center, helping others seek out their family heritage. She was the main caregiver for her mother during her declining years and for her husband Tom who developed Parkinson’s Disease. As Trudy’s health declined, the care and support from her son John, daughter Nancy, and their families was lovingly given and gratefully received. Trudy loved people and will forever have a special connection with many friends. She exemplified a life of devoted service to God, to her family, and to anyone who crossed her path. She endured trials and health challenges with grace, courage, and a smile that twinkled in her eyes. A fond farewell to a faithful woman and our beloved mother, until we meet again. Trudy is preceded in death by her husband Thomas; by her siblings Margaret, Richard, LaVer, John, Wilbert, Val, and Joe; and by infant grandchild Matthew. She is survived by her children Charles (Laura Clark) of Bluffdale, Utah; Nancy (Paul) Gregory of Boise, Idaho; Ada (Keith) Wilson of Orem, Utah; Harold (Shauna Bowser) of Salem, Utah; David (Christy Wheeler) of Bluffdale, Utah; Ann (Craig) Draughon, of Chapel Hill, North Carolina; and John (Kim Koyle) of Asheville, North Carolina. Her posterity includes 37 grandchildren and 68 great-grandchildren.

The family of Mrs. Ceytru "Trudy" Bentley Garner created this Life Tributes page to make it easy to share your memories.

Send flowers to the Garner family.