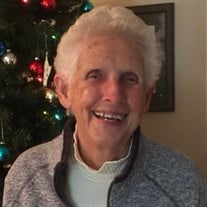 Evelyn Doris Black Todd, 83, passed away on May 22, 2021 at the Cottingham House in Seneca. Born July 29, 1937, Evelyn was the daughter of the late Bunyan Black, Sr. and Nevada Hudson Black of Walhalla. Evelyn was a graduate of Walhalla High School where she excelled as a basketball player. She retired from the School District of Oconee County. She was a member of St. John’s Evangelical Lutheran Church. She supported and ensured that her children obtained higher education and inspired them to always be the best at whatever they pursued. She was a wonderful grandmother who loved and couldn’t talk enough about her grandchildren. Carrie is especially grateful that her mother cared for her youngest son allowing her to pursue her career and instilled work ethic, confidence and the love of farming in him. Evelyn is survived by her brother Randy Black (Carolyn) of West Union, and sisters: Pauline Lusk, Shirley Hamby (Ed), Frances Black and Glennis Fowler all of Walhalla. Three children, Mark (Lauren) of Tulsa, Oklahoma, Mike (Cindy) of West Union and Carrie Dunton (Michael) of Seneca. Seven grandchildren, Andrew Todd (Lauren) of St. Louis, Missouri, Jason Todd of Clemson, Cory Dunton of Boston, Cody Dunton of Chicago, Carson Dunton of Seneca, Ken Schultz of Greenville and Kyle Schultz of Clemson. Three great grandchildren Kaden, Melody and Kylie Schultz and many nieces and nephews. Evelyn was preceded in death by her husband of 57 years, Arthur Eugene Todd and her brothers June Black of Walhalla and Ralph Black of Seneca. Graveside services will be held at 10:00 AM, Monday, May 24, 2021 at Oconee Memorial Park. The family would like to thank the wonderful nurses at the Cottingham House, Dr. Jaymi Meyers, Loretta Miller and Debra Gleaton who cared for her. In lieu of flowers, donations can be made to St. John’s Lutheran Church, Giving Garden: 301 W. Main St., Walhalla, SC 29691 or the Cottingham Hospice House, Attn: Foundation Office, 298 Memorial Drive, Seneca, SC 29672.

Evelyn Doris Black Todd, 83, passed away on May 22, 2021 at the Cottingham House in Seneca. Born July 29, 1937, Evelyn was the daughter of the late Bunyan Black, Sr. and Nevada Hudson Black of Walhalla. Evelyn was a graduate of Walhalla High... View Obituary & Service Information

The family of Mrs. Evelyn Doris Black Todd created this Life Tributes page to make it easy to share your memories.

Send flowers to the Todd family.