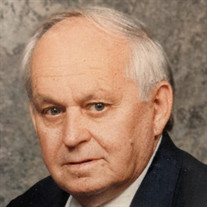 Larry Sanford Whitfield, 86, husband of Josephine “Jo” Chapman Whitfield, of 107 Brookwood Dr., Seneca went home to be with his Lord and Savior on Friday, June 11, 2021 just one day shy of his 87th birthday. Born June 12, 1934 in Townville, SC, Larry was the son of the late Leonard Franklin Whitfield and Julia King Whitfield Monts. Larry attended Townville High School where he finished in the eighth grade, yet continued to read and educate himself throughout his life and later received his associates degree from Tri-County Technical College. He worked various jobs from the one-hundred-acre farm to running a convenience store. He worked several years at Defore Milliken Plant, J.P. Stevens and eventually retired after twenty-four years of service with Duke Energy in the fabrication shop. Before going to work for Duke Energy, Larry enlisted in the United States Army and served two years at Fort Benning, GA, and was honorably discharged. Larry was a member of the Seneca Masonic Lodge #185, Hejaz Shrine Temple, and Clemson York Rite. Larry’s proudest titles were that of Husband, Dad, Grandad and Great Grandad. Larry was of the Baptist faith and had a deep respect for the Bible having read the Bible cover to cover over two-hundred times. He believed salvation was through Christ alone, not through church membership, tithes or baptism but through a knowledge of and a personal relationship with the Lord. “Get all the education you can” he frequently told the youngsters, “What you put in your head, no one can take from you.” Proverbs 4: 5-7. In addition to his wife of sixty-nine years, Josephine “Jo” Chapman Whitfield, Larry is survived by a son: Michael Whitfield (Dawn) of Walhalla; brother Dan Whitfield (Cely) of Anderson; grandchildren: Matt Treadway (Deanna), Brad Whitfield (Christy), Nick Whitfield (Bailey), Caden M. Whitfield; great-grandchildren: Mason and Mali Treadway, Brylee and Teagan Whitfield, Sawyer and Luke Whitfield. In addition to his parents, Mr. Whitfield was preceded in death by an infant daughter: Julia Lavern Whitfield, grandson: Brandon Larry Whitfield, great-granddaughter: Norah Ryan Whitfield and several brothers and sisters. Graveside service will be conducted at 2:00 P. M. on Tuesday, June 15, 2021 at Oconee Memorial Park. The family will receive friends from 6:00 – 8:00 on Monday, June 14, 2021 at Davenport Funeral Home. Flowers are accepted or memorials may be made to the Shriners Hospital for Children, 950 W. Faris Rd., Greenville, SC 29605. The family is at the home.

The family of Mr. Larry Sanford Whitfield created this Life Tributes page to make it easy to share your memories.

Send flowers to the Whitfield family.