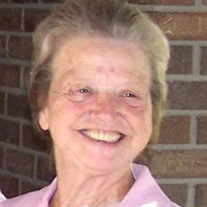 Margaret Mae Hogan, 83, of 224 Todd St. Walhalla, SC went to be with the Lord and her late husband, Ernest Tilford Hogan on December,5th 2021 surrounded by her loving family at home. She had a large family that survived her including her siblings Charles Gibson and Laura Gail Sanders. Her children Donna Hogan, Randall (Sandra) Hogan, Jeffrey (Angela) Hogan, Edward Hogan, and Angela (Russell) Hartberger. Her grandchildren are Jonathan D. Hogan, Dawn (Jason) Hogan, Adam Hogan, Kayla Butts, Jonathan S. Hogan, Brandy Hogan, Devon (Kayla) Phillips, Danielle (Christopher) McKerley, Corey Hogan, and Isabella Hogan. Her great-grandchildren are Derrick, Kara, Connor, Zackery, Breanna, Brendan, Sofia, and Lilian. She also raised her additional grandchildren Holly (Jeffrey) Sanders, Jodi Bleckley, and their children Chase, Kaleb, Tyler, Daymon, Christian, River, Hannah, Breanna, Skylar, and Austin. Margaret was unlike any person you could ever meet, an angel in disguise. She was the one person that would accept you just as you were. The moment you walked in her door, you knew you were home. She would always feed you and go above and beyond to bring happiness to others. Mrs. Hogan was a member of Gap Hill Holiness Church in Six Mile, SC for most of her life and was beloved by her family and the community that became her family. Margaret was a homemaker for over 50 years. She was a loving, honorable, honest, and respected woman. She was also a mother, sister, and best friend but most of all she was Nanny. Margaret was truly God's little helper and she left behind a legacy full of love that will never be forgotten. A visitation will take place Thursday, December 9th, 2021 12:30 pm at Davenport Funeral Home in Walhalla SC followed by her service at 2 pm in their chapel and burial at Evergreen Memorial Gardens Walhalla, SC.

Margaret Mae Hogan, 83, of 224 Todd St. Walhalla, SC went to be with the Lord and her late husband, Ernest Tilford Hogan on December,5th 2021 surrounded by her loving family at home. She had a large family that survived her including her siblings... View Obituary & Service Information

The family of Mrs. Margaret Mae Hogan created this Life Tributes page to make it easy to share your memories.

Send flowers to the Hogan family.