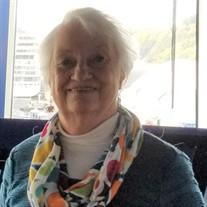 Born in Brockton, MA. on October 3, 1940. Married John Roger Smith, “Roger”, on October 2, 1965, at St. Anne’s Church, in Bethlehem, PA. Ceremony performed by Roger’s cousin, Reverend William J. J. O’Donnell. In addition to her husband, Sue is survived by her son: Michael Smith of Valparaiso, Indiana; daughter: Diane Petrice (Mike) of Fountain Inn, South Carolina; grandchildren: Nathan Petrice and Joseph Petrice; cherished nieces and nephews, including Alyssa, Gary, Jeff and Todd. Preceding Sue in death are her parents: Harlan Glenn Allen, Sr. and Margaret Louise Emerson Allen; brother: Lt. Col. H. Glenn “Gubby” Allen Jr. In 1962, Sue worked for Bethlehem Steel Quincy shipyards in Boston, MA. In 1965 she was transferred to Bethlehem, PA prior to being transferred to Bethlehem’s new Burns Harbor Plant in Indiana as an Administrative Assistant. While in Bethlehem, she met her future husband, Roger, which was the start of a 55 year marriage. They moved to Valparaiso, IN, where they lived for 38 years. Sue got an Associate in Science degree from Fisher College in 1960. After her two children, Diane and Michael, were grown, at 48 years of age, Sue asked Roger if he would mind if she went to Purdue University to finish her degree. Roger’s reply was “go for it” and said he would support her in every way. Sue went back and completed her degree from Purdue University. Only problem she said at Purdue was since she could have been the mother of most of her fellow students. She said she had to get used to them calling her “mom”. Sue worked as an Administrative Assistant at Sprague Devices in Michigan City, IN for many years. Sue was a member of St. Paul the Apostle Catholic Church in Seneca, South Carolina. Sue was a very skillful sewer, quilter, and knitter. Sue loved to knit, quilt, and sew complicated patterns with ease. Sue was happy to help beginners to learn the fine points of sewing and knitting. Even though many of her projects took a long time to complete, she was more than happy to give them away to her friends. Sue loved to go on train rides. She liked the White Pass & Yukon railroad trip which she did at the end of a 3 week Canadian cruise trip. In her opinion, the railroad trip she liked best was a 4 day Via Rail trip she took from Vancouver, Canada all the way to Toronto. She also supported her husband, Roger, in his model railroad hobby. Sue also loved cruises. She enjoyed cruising the Caribbean with her daughter and family and enjoyed Viking Cruises in the Scandinavian Countries. Sue loved lobster and for many years took an annual vacation to Camden and Cape Porpoise, Maine. Sue knew how to properly eat a lobster and could down two lobsters in one sitting. A visitation will be conducted from 6:00-8:00 PM, Friday, August 20, 2021 at Davenport Funeral Home in West Union, SC. In lieu of flowers, donations may be made to Prisma Cancer Institute, 131 Lila Doyle Dr., Seneca, SC 29672, or Central Railway Museum and Historical Association, 108 Werner St, Central, South Carolina 29630, in Sue’s name.

The family of Mrs. Susan "Sue" Smith created this Life Tributes page to make it easy to share your memories.

Send flowers to the Smith family.