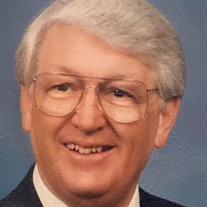 Proverbs 13:22a “A good man leaves an inheritance to his children’s children,” Surrounded by family on October 6, 2020, Walter Riley Wright (aka: Walt, Dad, Pops) moved one last time from his temporary home on earth to his eternal home prepared by Jesus. He is survived by his wife Tena (Ernestine Lamb Wright) his brother James R. Wright, his two sons and their wives: Steven and Robin Wright and Monte and Mary Wright, and a granddaughter, Anji Wright (Pops’ delight and sometimes golfing buddy.) Born in 1931, Walt came from humble beginnings. He was born the son of a rock mason and a seamstress near Hendersonville, NC. With hard work he was able to gain entrance to tuition free Berea College in Kentucky. There he earned a bachelor’s degree in chemistry, fell in love with his wife of 66 years, played collegiate baseball (and is rumored to have made a little spending money, on the sly, by playing minor league baseball.) While his sons never matched his baseball prowess, they did join Walt on church softball leagues as he often recited the mantra: “3 Wrights make a run.” After college Walt served as an officer in the U. S. Navy as an underwater demolition specialist/instructor hard hat deep-sea diver (yes, the kind with the big locking bell helmet and heavy weighted boots.) Incredibly, he did not then, nor ever did learn to swim on top of the water. Upon leaving the Navy, Walt worked as a chemist for Dupont in Delaware, the petroleum industry in Odessa, Texas (where he became a member of the Masonic Lodge) and for the development of solid rocket fuel propellant in Black Mountain, North Carolina. Unassumingly brilliant, Walt returned to school and earned his Ph.D. in biochemistry from N.C. State University. As a clinical chemist he worked for various pharmaceutical companies, hospitals and medical laboratories. Later, in retirement, Walt would serve his community as a volunteer firefighter. No doubt his time as a deep-sea diver, underwater with all his heavy equipment, made him more comfortable with heavy gear and oxygen tanks while fighting fires. During his time in the Navy and early work as a chemist, Walt and Tena had their two sons. They shared the adventure of parenting while moving countless times about the country as Walt’s career advanced. They moved so often that Steve once had to ask a police officer how to get home, and Monte, coming home from college with a load of laundry, found the washer and dryer packed in a moving van and the home sold! Despite the gypsy lifestyle, Walt (and Tena) provided a stable and secure home. He instilled in his sons a strong work ethic, and a love of life, sports, and adventure. He brought us a sense of humor and playfulness. (Just peek into his gaudy wardrobe of Christmas attire.) He nurtured love for each other regardless of our imperfections, and a rock-solid faith foundation. Walt’s own story of faith began in his family church as a youth where he won a bible contest that awarded him a trip for training with the young evangelist from Black Mountain, NC - Billy Graham. This would lead to an opportunity to work on a Billy Graham crusade. (Interestingly, later as an adult, he and his family moved to Black Mountain and lived on the same road as the Reverend Graham.) Just as he was encouraged to share his faith as a youth, Walt continued to share his faith with his family, co-workers, golf buddies, and with all he came to know. A good man, following the instruction of Proverbs 13, Walt’s inheritance to us was to learn, learn a lot; work, work hard; love, love graciously; live, live adventurously; laugh, laugh often at yourself; and hope, hope assuredly knowing the source of all hope has called you to heaven and paid the price for your admission. You just need to accept it. This was the greatest inheritance Walt/Dad/Pops left to us. Share it! See you later Pops …! (Due to Covid-19 concerns, a memorial service celebrating his life will be scheduled at a later date. If you would like information on the future memorial, please contact Monte Wright at: [email protected] In lieu of flowers, the family asks you to consider making a memorial donation to the American Cancer Society, Divine Hospice of Anderson, S.C., or College Street Baptist Church in Walhalla, S.C.) A memorial service has been set for Sunday, November 8, 2020, at 2:00 PM, at College Street Baptist Church.

The family of Mr. Walter Riley Wright created this Life Tributes page to make it easy to share your memories.

Proverbs 13:22a “A good man leaves an inheritance to his children’s...

Send flowers to the Wright family.