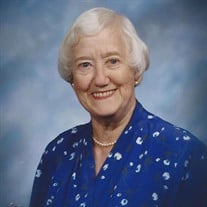 Whyoma Jeanne Davis, 93, wife of Curtis Eugene Davis, of 1462 E. Tamassee Drive, passed away Monday, February 7, 2022, at Oconee Memorial Hospital. A native of Traverse City, MI, Mrs. Davis was the daughter of the late Lee Royce Nichols, Sr. and Matilda Mary Elizabeth Klinkner Nichols. She was a member of the Red Hat Club and St. Mark United Methodist Church. In addition to her husband, Mrs. Davis is survived by her son: Gary Curtis Davis; daughters: Pamela Davis Anderson, Ann Davis, Teresa Davis Brown and Kelly Davis Dioguardi; grandchildren: Matthew Anderson, Mallory Anderson, Jennifer Hanner, Eric Davis, JD Brown, Mackenzie Brown, Donovan Dioguardi and Jillian Dioguardi ; and great-grandchildren: Ian Davis and Carson Hanner. In addition to her parents, Mrs. Davis is preceded in death by her brother: Lee R. Nichols, Jr.; and sister: Cleo Elizabeth Hayden. Whyoma Davis also known as “Y” to all us who knew her, will be greatly missed. She met Curt, the “love of her life” at a social dance and that is where it began, in 1952. Four days later they were engaged. They started there life together in Georgia, then to California for a time and then off to Michigan where they started their family with Pam, then Gary, next Ann and then Teresa. Kelly arrived when they moved to Ohio. Since then, Whyoma and Curt moved to New Jersey and then finally to South Carolina. She loved her family and would do anything for them. She traveled the country with Curt’s job and made each new place be a wonderful new experience for the family. From musical lessons, to Scout’s Clubs, (both Boys and Girls), to dance lessons, to Community Theater…Whyoma was the key part in creating a world for her family to thrive in. She absolutely loved her grandkids as well from Mallory, Matthew, Jennifer, Eric, Mackenzie, JD, Donovan and Jillian Not to mention adopted daughter Debbi, who grew up with the Davis kids. Whyoma was quite the seamstress and worked for Jantzen for some time and then switched to working for an interior designer. She would make exclusively beautiful window draperies and other room adornments. Whyoma also served her community as well. She helped with the Salkehatchie, which builds and repairs homes in the area every year. She also assisted in the building of wheelchair ramps for those in need. She also travelled to Hurricane disaster zones and helped to rebuild the areas. Whyoma and Curt would also travel for pleasure to Europe, South America, Jamaica, Bermuda as well as Hawaii and Alaska. Whyoma loved to travel and we imagine her traveling now, from place to place, seeing those she loves and letting us know that she is here, joyfully watching over us in love. Funeral services will be conducted at 2:00 PM, Monday, February 14, 2022, at St. Mark United Methodist Church with burial to follow at Heritage Memorial Gardens. The family will receive friends from 1:00-2:00 PM, Monday, prior to the service, at the church. Flowers are accepted. The family is at their respective homes.

The family of Mrs. Whyoma Jeanne Davis created this Life Tributes page to make it easy to share your memories.

Send flowers to the Davis family.